We are extremely excited to announce that American vocalist and YouTube star Nikki Simmons has joined the Sonic Boom Team as part of our Female Lead Singer add-on (alongside the band) for all Sonic Boom Event and Party Packages! 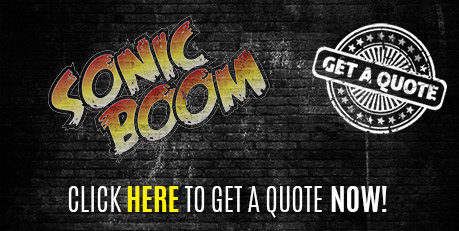 We hope you are all doing well during this strange time for us all.

We would like to address the latest Coronavirus Outbreak and send a messge to all of our customers.

We have had so much fun recently and have been hard at work behind the scenes! We have just had so much fun with Matt & Roo from Backlash Photography in their studio, and we can't wait to share our new images with you when they are all done!   We have also been in the studio and have lots of new songs that will be uploaded to our webiste for you all to hear! So watch out for each of our new tracks being uploaded throughout the year onto this website and our ever growing social media pages! We have taken lots of wedding shows across the UK this month but two stand out bookings we are really excited about are two corporate shows, one at the fantastic Telford International Centre for 400 people and another at the Styal Lodge in Manchester.

We have been snapped up already for New Years Eve 2020! We were booked straight away on New Years Day 2020 and we are all over the moon with the news! We are now taking lots of provate bookings for 2021 as we have taken a record amount of private shows for 2020.

Our best selling Event Party Package is the Diamond one - so to honour this fact we have got bespoke business cards made for our lovely amazing female DJ's Aka Spin & PeachyMix ! Designed by our multi talented drummer Mr Bartlett be sure to grab yours when the ladies play lots of shows alongside the band in 2020 and beyond! Wishing all of our friends, family and fan's a fantastic 2020 and thank you for all your continued support - We love you all x .